How to Get a Team to Work Together 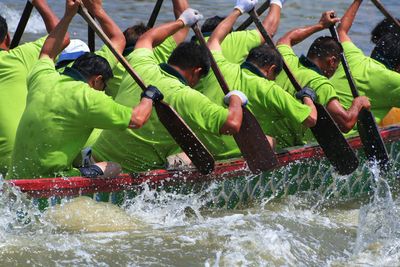 Working in teams can be both beneficial and challenging. Sharing work can be less than ideal if the team members do not work well together. In most team settings, you have a leader and one or two other people who share the workload for the entire team. This can lead to pent-up feelings of resentment on the part of the worker bees and sometimes the other team members can feel left out. Teams that work well together can greatly increase workplace productivity and creates a more cohesive company culture. Here are seven tips that will help your company’s teams work well together.

Communicate. This is one of the most important elements of strong team performance. Keeping the lines of communication clear, open, honest, and respectful will allow team members to express their feelings in a way that prevents a buildup of hidden anger or distrust. Encourage team members to ask questions and listen to one another. This helps to build better team dynamics and stronger relationships.

Respect individuality. When working with teams, managers must understand the importance of individuality. When a group of people with different skills and personalities is formed to accomplish a specific task, it is important to understand what each team member brings to the table. Each team member needs to contribute his or her strengths for the team to function as one.

Encourage creativity. Creative input should be encouraged by every team member on every project. Negative comments such as, ”what a dumb idea” should be discouraged, and a supportive environment that is open to new ideas should be cultivated. Brainstorming should be seen as a time to throw ideas out without placing judgment. The best ideas can be culled out later.

Gender Diversity. This might seem like a strange tip for creating a great team, but women’s social skills tend to be a little stronger than men’s. Including women is one way of prioritizing social skills, which have a direct impact on team performance. Studies have shown that companies with female board members have better share price performance than those with boards with only male members.

Trust-Building Exercises. One way to enhance team spirit is to set aside time for trust-building exercises. If trust and support are seen as an important part of company culture, they are more likely to grow. And teams that appear more trustworthy have been shown to perform better than those where trust is lacking. Trust is a reciprocal feeling and one bad apple can spoil the bunch.

Define Roles. The recent Occupy Wall Street political movement was seen as unsuccessful because no real leaders emerged. A key idea behind the movement when it was first formed was that no one would lead and everyone would all work on the same level. While this democratic approach was laudable, it created confusion and zero teamwork, since there was no leader. Effective teams require clearly-defined roles so everyone knows what he or she is responsible for. This creates better team cohesion and productivity.

Do Not Settle. The last piece of advice deals with how you staff your team. Know what you want in terms of team members, and keep looking until you find candidates who are a perfect fit. If one person is wrong for the job, it can throw off the entire team dynamic.

Managing teams of individuals with different kinds of personalities and skills can be challenging, but following these tips will help you maximize team performance and help you when you set up teams for your company in the future.