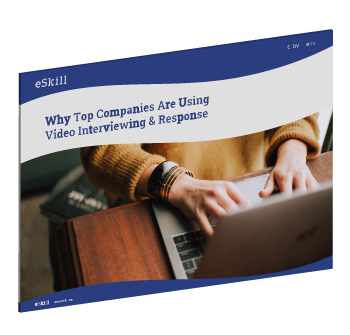 Video interviewing software has become a popular tool for top companies to optimize the traditional hiring process. This innovative technology is used in various stages of the talent acquisition process, from the early screening stages to final interviews. By leveraging the power of video, employers save time and money while increasing the overall quality of their talent pool.

While most companies are familiar with a typical two-person interview via video, a new cutting-edge video interview process has emerged—the use of asynchronous video interviews (AVIs).

In AVIs, candidates answer pre-defined interview questions on their own time, and then the recordings of these answers are reviewed later by hiring teams. The technology is widely used amongst top companies, including Goldman Sachs, Apple, Twitter, and Google.

The amount of time U.S. employers spend on interviews has increased significantly since 2009, going from an average of 3.3 days in 2009 to 23.8 days in 2017. This increase provides at least a partial explanation for why it takes longer to fill jobs now.

Learn more about video interviews by downloading the Executive Report on this page.